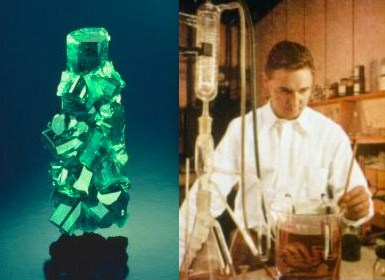 In the 1920s, a boy with a dream to grow diamonds began the historic experiments that would launch the world’s leading lab-grown gemstone company.

A Boy With a Dream

When San Francisco native Carroll Chatham was a young 12-year-old boy, he built his first gem laboratory in his parent’s home. He quickly became an aspiring chemist and dreamed of one day recreating the failed diamond-growing experiments of French chemist, Henri Moissan, from the 1890s.

Although his efforts were unsuccessful, he pressed on refusing to give up, until one evening an ill attempt caused a loud boom that shook his entire neighborhood. In fear of being forced to shut down his laboratory, he promised his parents he would shift his gem-growing focus from diamonds to emeralds. This would become less hazardous since emeralds require lower pressures to grow.

The Original Architect of the Gem Growing Industry

When Carroll left for college at the California Institute of Technology, his latest emerald-growing experiment was still running in his parent’s garage. His father took notice, and turned off the power supply to his project. As fate would have it, this minor act caused emerald crystals to grow inside the crucible.

This occurrence left Chatham completely stumped and puzzled. It took him nearly three years to understand why and how the emeralds formed. When he did, he founded the company that bears his name.

He steadily began growing emeralds in 1938 and once he was able to perfect the process he moved onto ruby. The year was 1958 when he was able to successfully grow the first ruby in a laboratory. Again, it took him a couple of years to fully understand the process. Next, he grew alexandrite in 1972. He was beginning to diversify his product-mix and for the next 20-years, he would grow a variety of sapphires including the exotic padparadscha.

Chatham discovered the secret to duplicating the conditions deep underground: the temperature, the pressure and the chemical makeup, and successfully grow gemstones over the course of a year’s time. All Chatham lab grown gemstones and diamonds possess the same physical, optical and chemical structure as their mined counterpart.

Tom Chatham, Carroll’s youngest son, joined his father in the original San Francisco research laboratory in 1965. His first task was to understand flux-grown ruby. Although he had a knack for chemistry, he began developing a greater interest in the business aspect of the company and determined that selling cut gemstones rather than providing buyers with rough, was a much more effective marketing strategy.

Throughout the next several years, Tom built long-lasting relationships with a number of overseas cutters who eventually became Chatham’s master cutters to this day. In 1976, Tom was appointed President of Chatham Created Gems, Inc.

A decade after Carroll’s passing in 1983, Tom achieved his father’s lifelong dream of growing diamonds in a laboratory. Tom’s continued fascination with gemstones and crystal formation resulted in the introduction of several other lab-grown gems including aqua spinel, morganite, colored diamonds, and champagne sapphire.

Chatham has since discontinued production of colored diamonds due to the irradiated market. Morganite has also been discontinued and replaced with champagne sapphire, a harder gem material with greater saturation.

For the next several decades, Tom grew the loose wholesale business and became the world’s leader in lab grown gemstones. In the early 2000s, Tom partnered up with longtime friend and industry leader, Harry Stubbert. Harry brought his combined years of experience with his long-term vision for Chatham and decided to introduce a line of finished jewelry featuring its lab grown gemstones.

In 2007, Harry unveiled a unique collection of jewelry consisting of earrings, pendants and rings. His design inspiration was taken from the gemstones themselves; high clarity allowed for a wider range of cuts including exotic cuts that had never been achieved before with its mined counterparts. This enormous advantage has birthed Chatham-designed shapes like the onion, flame and century. Exclusively found in Chatham’s branded collection, these shapes enhance the look of any piece adding a distinct flair to an otherwise ordinary design.

Chatham is still recognized as the leader of laboratory-grown gemstones. The company’s Lifetime Warranty and Certificate of Authenticity assure that Chatham Lab-Grown gems will continue Carroll’s legacy for generations to come.