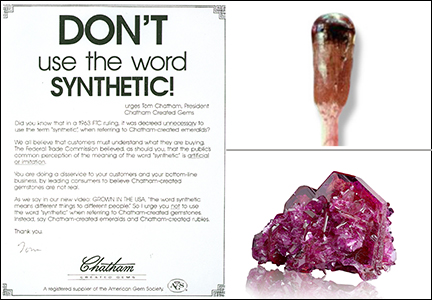 At Chatham we strive to use language that communicates what we do clearly without confusing consumers. Our belief is that words matter and full disclosure has always been our means of success. We prefer to call our gems “lab-grown” because we feel it most clearly describes what they are. We are crystal growers.

When Carroll Chatham grew his first emerald crystal in the 1930s, the jewelry industry was worried that the value of earth-mined gems would collapse. They were also worried they wouldn’t be able to tell lab-grown emeralds from mined emeralds.

In 1959, the Federal Trade Commission stepped in to make strict rules about what companies like ours could call their products. The commission ordered Carroll Chatham to release all the details of his process in order to decide whether his gems could be called “cultured.” Because he refused to divulge the secret of how his gems were grown, Carroll agreed to stop calling them “cultured” and to call them “Chatham-created,” which solidified our position as a lab grown gemstone brand in the jewelry industry.

A Diamond is a Diamond.

The year 2018 may be considered one of the greatest victories in the laboratory grown diamond arena. The Federal Trade Commission revised its Jewelry Guides in favor of the consumer. While these Guides are not law, they are put in place as a guideline for advertising and marketing to prevent consumer deception.

The Guides amended the definition of a diamond. Most importantly, it removed the word ‘natural’ from its definition: “A diamond is a mineral consisting essentially of pure carbon crystallized in the isometric system. It is found in many colors. Its hardness is 10; its specific gravity is approximately 3.52; and it has a refractive index of 2.42.”

It determined that there are multiple ways in which a diamond can naturally form, including in a laboratory under a controlled environment. The ruling was based on science. Is there any other better way? After all, a lab grown diamond can be defined the same way, possessing the identical optical, physical and chemical properties as its earth mined counterpart.

When referring to a diamond grown in a lab, acceptable terms include “laboratory-grown,” “laboratory-created,” “[manufacturer-name]-created,” or “some other word or phrase of like meaning.”

Simulants Are Not Lab Grown

To make this debate about nomenclature even more confusing, there are some gem materials that are man-made and also imitations. Cubic zirconia is man-made but it’s an imitation diamond, not a synthetic or lab-grown diamond (because it’s not actually diamond.) Unfortunately, plenty of unscrupulous people use “lab,” “man-made,” or “created” to refer to imitations that are not the actual minerals described. That’s not just bad etiquette. That’s deceptive and clearly against FTC rules.

In these inexpensive processes, powdered chemical ingredients are melted into a large block in an hour, not grown as crystals over a year. The crystal structure of flame fusion or pulled synthetics is disoriented, like glass, due to the way it’s made. It doesn’t have natural crystal faces. From a crystallography perspective, flame fusion isn’t the same as mined ruby or sapphire.

In the end, that’s what this is all about: understanding what the differences are between different kinds of gems so you can make an informed smart choice: mined, lab-grown, man-made, or imitation. It’s up to you!